Thailand, or officially the Kingdom of Thailand, is formerly known as Siam and is located at the centre of the Indochina peninsula in Southeast Asia.

Thailand Kingdom, or officially the Kingdom of Thailand, is formerly known as Siam. It is located at the centre of the Indochina peninsula in Southeast Asia.

Maha Vajiralongkorn Bodindradebayavarangkun has been the King of Thailand since 2016. He is the only son of King Bhumibol Adulyadej and Queen Sirikit.

Bhumibol Adulyadej (5 December 1927 – 13 October 2016) is the previous King of Thailand, also known as Rama IX. Because he is the ninth monarch of the Chakri Dynasty. He was born in Cambridge MA on December 5, 1927. In 1950 he married Sirikit.
They have four children: Sirindhorn, Vajiralongkorn, Chulabhorn Walailak and Ubolratana Rajakanya.

The official language of Thailand is “Thai”. It is the principal language of government and education and is spoken throughout the country. It is closely related to Lao, Shan in Burma, and also many smaller languages that can be found in South China and the north of Vietnam.

We make buying a house in Hua Hin Thailand easy and reliable for you!

Property Real Estate Hua Hin is an internationally experienced real estate professional. At Property Realestate Hua Hin we are dedicated to all people who are looking for a house for sale Hua Hin, villa, bungalow, condominium or land to build in Hua Hin, Cha-Am, the Pranburi District, but also for real estate property all over Thailand Kingdom.
People who really want to live their dream of spending the best days of their life in the embracing culture, climate and landscape of this paradise on earth… Amazing Thailand. 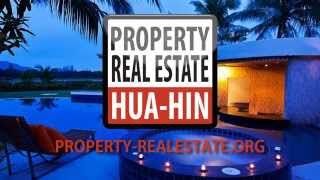